When Purpose and Passion Collide

I’ve been on quite a long drawn-out journey to reinvent myself and my business, doing bits of this and bits of that in a personal sense and a business sense.

A few years ago, I had some unexplainable urges to do things I had never done before.

The first was to write a book with Jay Conrad Levinson. The offer was made on a webinar and about 2 weeks later I had cashed in retirement funds and airline points to attend a Guerrilla Marketing Intensive in his home. I spent the next 9 months painstakingly writing the Guerrilla Tourism Marketing book which I published on 12-12-12…. and it changed my life.

The following year, I had an even stronger urge to go to the World Domination Summit — I didn’t even really know what it was all about — I saw a post on Facebook about tickets being sold by those who couldn’t attend and I knew I had to go.

It was at this event where I had the weirdest experience of my life — the presenter was talking about something — no idea what anymore — and then he switched gears. His wife joined him onstage and together they directed us to clear our laps, to close our eyes, to say a validation to ourselves then put down our baby finger on our left hand. We were to say this validation 10x, ending up with the baby finger on our right hand.

I was thrown by this — my lap was full of stuff and it took me a while to get my act together. By the time I could join in we were all the way to our middle finger right hand. I said something and put down that finger. Nope, that wasn’t it.

I then said to myself “I’ve been chosen to reinvent lives globally” and said “Yes, that feels right.”

I then said it one last time emphasizing “chosen“.

I don’t know what hit me but something very powerful hit me like a tsunami.

I immediately burst into tears. I couldn’t explain what happened but fortunately the many strangers I randomly shared with were kind enough to listen so I could calm down. 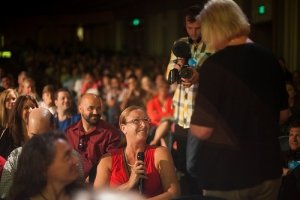 After the break I chose to sit up front, on the aisle, and the presenter bee-lined off the stage, walked up to me and asked me who I was and what I did.

The funny thing is that she had been talking about how she’d quit her job at the NPR without a safety net.

She didn’t know why she had to do it but she did and now everyone — including herself — thought she was nuts! When I replied “I’m Carol Wain, Queen of Reinvention and I help people just like you to reinvent your life” she was gob-smacked. (well, many people were, myself included!)

This long story is the set-up to my excitement.

It’s been a few years since then and I have taken many steps forward and many steps backward.

I was spinning my wheels doing things but not making the kind of difference I am capable of.

Late last year I was speaking to a friend about why I felt I wasn’t as successful as I had been in the past and the answer was simple. Discipline and Accountability — nothing more, nothing less. I had heaps more of both when I was awarded Entrepreneur of the Year for 2003 — and at the time I had an 8 year old and a 12 year old.

We decided to become Accountability partners.

Well, since then my world has changed.

I’d been playing in the Reinvention space for quite a while. In fact, I’ve interviewed a few of you, my readers, for my Reinvention Show and/or my Women’s Reinvention Summit. I knew that I didn’t want to be in life coaching and that business was where I needed to play.

When I woke up one morning with 2 words in my head, I knew it was what I have to do.

I’m starting a movement which teaches and shows business leaders how to create organizations which positively impact the people who support their business, their communities and the planet. This organization will take the best parts of all I’ve experienced to create a global community of leaders who reinvent their businesses to transform lives.

The website and business concept are being finalized now. I’m so excited about this that I’m barely sleeping these days…

1. I am enough. I have whatever I need inside me already.
2. Surround yourself with great people who collaborate and co-create, support and encourage you.
3. Be giving — my accountability partners received from me before I asked of them.
4. Spend time getting in touch with yourself, your dreams, your vision, core values, strengths and weaknesses, passion and purpose. Then build upon it.
5. Add value, always
6. Be profitable and use some of that profit to enrich the lives of others while protecting our planet.
7. The best currency is great relationships.

This was a long post… hope it inspires you.

The Launch of the Enlightened Capitalist – Consulting Services

Forget Causing a Stir — Instead Create a Ripple

How to Achieve What You Want in Life

Don’t Do What I Did in the Past. Do This Instead…

As an entrepreneur, Carol Wain has created a number of brands which focus on integrating engagement, sustainability, and both personal and business performance.

She works with individuals in leadership and management roles and with aspiring entrepreneurs who wish to leverage the power of business to create positive change.

Carol is an author, speaker, trusted advisor and mentor who won Entrepreneur of the Year in 2003.

How to Achieve What You Want in Life - Carol Wain

[…] your ideal day doesn’t feel right because it doesn’t align with your purpose, (or if you aren’t sure WHAT your purpose is, check out this […]